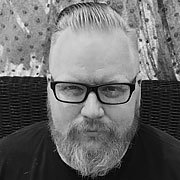 Jason Michael Hall has been an artist in the Film Industry for ten years. Arriving in LA with a skillset in comics, illustration and web design, Jason's goal was to change his career path and get involved in Visual Effects. He restarted has career primarily as a Pre-Visualization artist on the first JJ Abrams’ Star Trek a few weeks before graduating from the Certificate Program at the Gnomon School of Visual Effects. Since then he has been creating amazing action sequences for many of the top big-budget Visual Effects films of the last decade; including Star Trek, Justice League, Teenage Mutant Ninja Turtles, Transformers, Mission Impossible, X-Men and Deadpool. While primarily working in Pre-Viz, he’s also contributed in areas such as concept design, storyboarding, animatics, and other pre-production needs that include Motion Tests, Postviz, Pitchviz, and VR media. He’s currently living in the Echo Park neighborhood in Los Angeles with his wife Nicky when not traveling with a production. There he keeps himself busy with various other creative pursuits like pitches for original IP’s, writing music, DJ'ing, and trying to get better at the didgeridoo.