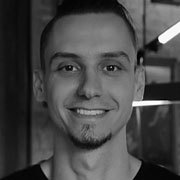 Art Director at Sony Santa Monica on God of War

Rafael is currently living in Santa Monica, California, working at Santa Monica Studio on the God of War franchise. He began his career in 2004, working for advertising studios in Brazil. After working as lead modeler for close to 3 years, he became a freelance character artist for cinematic, advertising productions and the toy industries, producing work for a great number of companies that include Hasbro, Marvel and Ubisoft. In 2011, he relocated to Canada to work at Bioware (EA) as a senior character artist on the Mass Effect and Dragon Age franchises. He moved to California in 2013 to work at SONY (VASG) as a character art supervisor, where he contributed to 6 titles, including, Killzone: Shadow Fall, Infamous 3 and The order:1886. After that, he was hired at Santa Monica Studio to work as a principal artist on the God of War series.