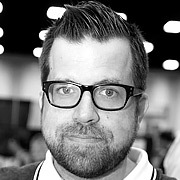 While attending the Ringling School of Design, Phil Noto began his career as an intern at Walt Disney Feature Animation Florida. After two more years of illustration study, he returned to Disney Animation as a clean-up artist. His credits there include The Lion King, Pocahontas, The Hunchback of Notre Dame, Mulan, and Lilo and Stitch. In 2001, Phil started his comic career as the cover artist for DC Comics' Birds of Prey. Since then he has worked on numerous comic projects such as Black Bull's Beautiful Killer, two Danger Girl specials, Jonah Hex, Superman/Supergirl: Maelstrom, Batgirl, and Avengers: Origin along with a variety of covers for different publishers. An early proponent of digital art, Phil now creates all his comic work digitally on a Mac with a Wacom Cintiq. He also does large format traditional painting and has had many one-man gallery shows.