In this lecture, Jerad Marantz shares his creature design techniques in an extensive lecture and demonstration. Beginning with a brief description of the creature, Jerad begins the design process with some loose sketches on paper. These are scanned as Jerad then discusses traditional and Photoshop techniques for executing a rough concept. From there the design is brought into ZBrush and the creature is sculpted using a wide range of tools and techniques for both blocking forms and detailing, all while Jerad shares his thoughts on how to effectively design a creature that is imbued with character while fulfilling its narrative role. Once the digital sculpture is completed, the creature is then textured and posed on a base. From there the tutorial moves on to getting highly realistic renders in Keyshot. The lecture also covers the importance of animated turntables and final Photoshop composites of the creature from multiple views for presentation to a client. Whether you are an industry professional or a student, this in-depth lecture covers Creature Design, Sculpting and Painting in ZBrush, Keyshot and Photoshop and will inspire your workflow as Jerad shares his talents and years of experience. 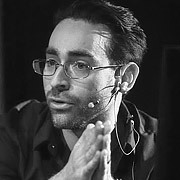 Jerad S. Marantz has been working in the film, game, and television industries for over 15 years. He started his career at an early age interning for Special FX houses; trying a little of everything enabled him to narrow his focus to character/creature design. His acquired skills in sculpture, painting, illustration, ZBrush, and Photoshop, all aid his unique sense of design.