This title offers insight into the environment workflows of Toni Bratincevic, Senior Environment Modeler at Blizzard Entertainment, who shares his techniques for creating an epic 3D environment illustration with five hours of lecture and demonstration.

In this thorough workshop, Toni explains the complete creation process for his latest personal project, detailing all the key stages from concept through to final illustration. He reveals how to organize 3D environments for efficient scene management and rendering, and demonstrates how to build materials and create effective material libraries.

Procedural modeling is also a key player in this comprehensive workshop, used to build up and scatter environmental elements throughout the scene for convincing results. Sharing his non-destructive workflow techniques, Toni demonstrates how the RailClone and ForestPack plugins for 3ds Max are effective tools for designing and developing impressive environments, and his detailed lessons delve into developing futuristic 3D architecture.

Concluding the workshop, Toni’s masterclass in compositing covers color correction and post-production techniques using Fusion and provides all the skills needed to bring your fantastical, imaginative environments to life. 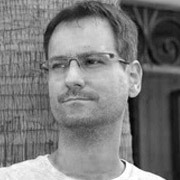 Toni Bratincevic is a Senior Environment Modeler at Blizzard Entertainment where he works in the animation team on the latest cinematics. A self-taught artist, his passion for 3D was kindled when he was first exposed to 3D-generated art and movies in the 90s, such as Terminator 2 and Jurassic Park. Toni didn’t have the opportunity to study art and animation, and it was during the completion of his IT degree that he first explored 3D art as a hobby. Toni began his career almost 15 years ago, working as a 3D generalist in Croatia for a studio producing commercials and documentaries. A few years later, he moved to the United States to work in game cinematics at Blur Studio before moving to Blizzard. Cinematics are a perfect balance for Toni; they allow him to work in video games while also being able to create VFX-quality artwork.