The Art of 'PULSE' with Harald Belker

In this title, Harald Belker covers his techniques that reflect the latest process used in entertainment design and concept creation. The crossover integration of several 3D programs, combined and finished in Adobe Photoshop®, provide the best results in the creation of stunning vehicles. Based on imagery from his latest book, PULSE: A Complete Guide to Futuristic Racing, he will first guide you through the process of building the racer in Modo®. He then demonstrates the set up and rendering phase in KeyShot®. The images are then combined and finished beautifully in Photoshop. To wrap things up, Belker will discuss the use of Google Sketch Up® for use building the futuristic racing environment. 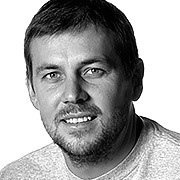 After graduating from the Art Center College of Design, Harald Belker fell into the dream design job of designing cars for Porsche. From there, Belker moved to Mercedes Benz in California where he had the privilege of working on the Smart Car as well as the 'S' and 'M' class models. Though Belker's early design work was focused on the industrial aspect of automotive design, he acquired a taste for entertainment design after he was offered the opportunity of designing the Batmobile for the movie, Batman and Robin. His list of credits boasts other such designs as the sport red Lexus and futuristic cars of Steven Spielberg's Minority Report; as well as the vehicle designs for Armageddon, Inspector Gadget, Cat in the Hat, and Tron Legacy. Belker describes his work as "graphically bold, with the sensitivity and vision to push new forms". He continues: "I like to design everything and I do. I am working on furniture, sports equipment, bags, toys, cars etc. I don't ever want to do the same thing over and over."